One of the value-added services that we provide in promoting hair and scalp health awareness, is through the free clinic activities that we conduct monthly on selected drugstores.

These free clinics are intended to help you monitor the progress of your Novuhair treatment. Our trained promodizers will assist you in getting a closer look at the present condition of your hair using our hair and scalp analyzer. They will show your scalp’s captured digital images and the corresponding analysis. Your data will be recorded to our database for your future reference and monthly monitoring while using Novuhair. 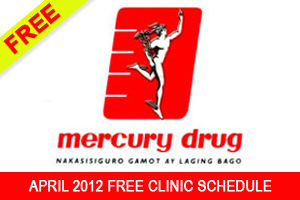 For the month of April 2012, we shall be conducting FREE Hair & Scalp Analysis on the following Mercury Drug branches from 1:00pm to 6:00pm:

We shall also be conducting the FREE hair and scalp analysis to the following Watsons Personal Care Stores:

Check out the following Rose Pharmacy branches for our FREE hair and scalp analysis for the month of April: